Newton’s Third Law of Motion – ACTION and REACTION are equal and opposite. 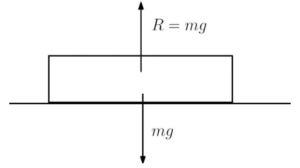 As you can see, the downward force exerted on the ground by the object is the object’s mass m multiplied by gravity. It follows that, since the object doesn’t move, the ground exerts an upward reactive force on the object equal in magnitude.

Note that the same can also be said for accelerating objects. By way of example, consider a vehicle that is accelerating and pulling along a trailer.

The trailer has the same acceleration as the vehicle and is pulled forwards by the tension in the tow bar. Conversely, resistance from the trailer exerts an equal and opposite force on the vehicle.

If multiple objects are connected and are acting in the same straight line, they can be treated as a single object.

In Examples 1 and 2 objects in contact with one another are treated as connected particles. In addition, we assume that an object is a particle with the same weight acting at a single point. Examples 3 and 4 involve a light inextensible string over a smooth pulley. This means that we assume that the string has negligible weight, it doesn’t stretch or have friction with the pulley.

See the Mechanics area of the Edexcel A-level specification – sections 6-9, pages 34-37 of this document.

A man of mass 80kg is using a lift that accelerates downwards at a rate of 1.5 m/s/s. Find the reactive force that the lift exerts on the man.

Show Solution
Weight and the reactive force are the two forces acting on the man. They work in opposing directions and so the resultant downward force on the man is 80g-R. This should be equal to the man’s mass multiplied by acceleration:

Note that the reactive force is not equal to the weight of the man.

A 1kg scale pan carrying a 3kg block is attached to a light inextensible rope and accelerating vertically upwards at a rate of 1m/s/s. Find the tension in the rope and the force exerted on the pan by the block. 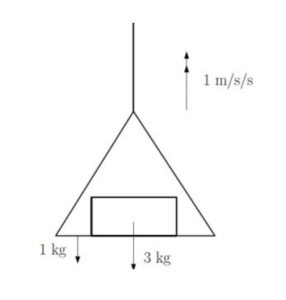 Considering the forces acting on the block only, the resultant force is the upward force from the pan P subtract the weight of the block:
$ P-3g=3\times 1 $
and so the force of the pan on the block is 32.4N.

Two particles of mass 3kg and 4kg are attached to the ends of a light inextensible string passing over a smooth pulley. The particles are released from rest. Find the acceleration of the particles and the tension in the string. Find the force exerted on the pulley by the string. 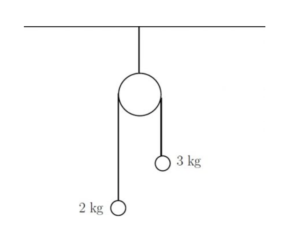 Two particles P and Q are connected by a light inextensible string. Firstly, particle P has mass 0.5kg and lies on a smooth horizontal table. Secondly, particle Q has mass 0.2 kg and hangs freely over the edge of the table 80 cm from the floor. The system is released from rest. Find the time it takes for particle Q to hit the floor given that tension remains constant.

Show Solution
Tension governs the acceleration of the object in the table via the equation T=0.5a since there are no opposing forces in the horizontal direction. The same tension opposes the hanging object via the equation:

Hence, 0.2g-0.5a=0.2a and the acceleration is 2g/7. Since acceleration is a constant we can use SUVAT equation 4 to find the time taken for the object to make a displacement of 0.8m. Note the initial velocity U is 0.