What is Hypothesis Testing?

Hypothesis Testing in statistics is exactly that – testing a hypothesis, where a hypothesis is a theory about a given situation. For example, you might have a coin that you suspect is biased as coin tossing seems to be favouring heads over tails. You might like to test the hypothesis that the coin is biased in favour of heads – this would be hypothesis testing.

See this example and some other Examples of Hypothesis Testing.

In order to test your hypothesis mathematically, you must first be very clear about what you are testing.  The hypothesis test should be set up in a formal fashion.

$H_0$: This is the commonly accepted theory, the one that is being challenged. It is the opposite of the alternative hypothesis. For example, the coin mentioned above FAIR.
$H_1$: The alternative hypothesis is the one being presented. This is the theory that is being tested using probabilities. For example, the coin mentioned above is BIASED.

However, the null and alternative hypotheses should be written in terms of a test statistic. The null hypothesis will either be accepted or rejected depending on the probability of an experiment result.

If the alternative hypothesis suggests bias in a given direction, i.e. the probability of tossing heads is greater than 0.5, then the test is one-tailed. On the contrary, if the direction is not specified the test is two-tailed. For example, the following hypotheses could be stated if the coin is biased either way:

For two-tailed test, since we are challenging the null hypothesis test either way, we must split the significance level up between the two experiment tails. Probabilities at both extremes of the experiment must be calculated and assessed. See some Examples of Hypothesis Testing.

See some Examples of Hypothesis Testing.

Three fair dice are rolled simultaneously. Find the probability that at least one dice has a number less than or equal to 2. 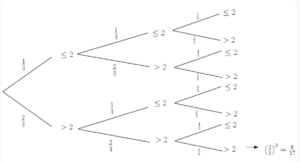 Show Solution
Start by creating a tree diagram and filling in the branch probabilities: