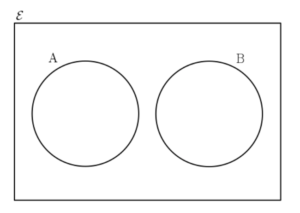 It is not possible for events A and B to occur at the same time. 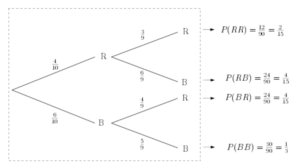 Events A and B are said to be independent if the probability of B occurring is unaffected by the occurrence of the event A happening. For example, now suppose that we are tossing a coin twice. Let A be the event that the first coin toss lands on heads. In addition, let B be the event that the second coin toss lands on heads. Clearly the result of the first coin toss does not affect the result of the second coin toss. See Tree Diagrams to this example in more detail. It follows that events A and B are independent.
Consider the  tree diagram shown here. The probability that event R occurs along the second branch is dependent on the outcome of the first event. It follows that events B and R are not independent. Hence, they are known as dependent events and the associated probabilities are conditional.